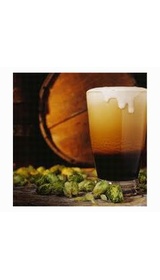 Add to Compare
Write a Review

Craft Beer Connect is a California-based beer of the month club that was founded in 2012 by two brothers. The brothers had recently moved from the East Coast to San Diego and were amazed by the quality of the local microbreweries. They decided to start a unique monthly beer club that would specialize in Californian breweries and would allow members the option of choosing which beers they wanted to receive each month. CBC currently has relationships established with 42 breweries around the state and features over 200 unique beers, some of which have been produced in such small quantities that you wouldn't ever find them in a local store.

Of the four membership programs CBC offers, the Specialties Club is the most premium one and offers access to their entire inventory of beer. For $60 a month (plus S&H), you will receive six 22-ounce or 750-mililiter bottles of high quality beer. Each shipment will contain two bottles of three different types of beer and a short newsletter that provides updates on the club's recent activity. Membership is ongoing until you cancel and you have until the 22nd of each month to make your beer selections or CBC will choose beers on your behalf. Shipping costs will vary depending on how far from San Diego you are, but prices appear to be competitive with other beer of the month clubs.

We give the Craft Beer Connect Specialties Club (Tier 3) an A- because we have been consistently impressed with the quality and variety of the beers we've received. We also love that you can choose your own beers and easily reference ratings from other members, Rate Beer and Beer Advocate to help make your decisions. We had to deduct a few points because CBC doesn't offer a 100% satisfaction guarantee and also because we wish the shipments included background and tasting notes on the beers. However, CBC is still a relatively young company and we think it will only continue to improve over time. The bottom line is that the beers we've received from the Specialties Club are amazing – some of the best we've ever tasted – and we highly recommend the club to our members.

Comparison at a Glance

Pricing
$60
$46.95 - $88.95
$38.95
Shipping Included
Shipping NOT Included
Shipping Included
Shipping Included
Bottles per Shipment
6 bottles (22oz and 750ml)
Choice of 2, 4 or 6 bottles (750ml)
12 bottles (12oz)
Business - 20%
Beer - 25%
Membership - 25%
Gifts - 10%
Shipping - 10%
User Feedback - 10%
Business Founded
2012
1994
1994
BBB-Accredited
No
Yes
No
Newsletter
Most Specialties Beer Club shipments contain a generic newsletter with updates on the club.
Yes, members of the Rare Beer Club will receive the club's monthly newsletter, Brew Harvest Review: Malt of the Earth, in each shipment. The newsletter provides tasting notes and additional background on each of the featured beers.
Yes, all shipments contain "Beer Expeditions", a monthly newsletter with information on the beer selections and reordering discounts.
Reviewing Previously Featured Beers
You can browse available Tier 1 beers on the website, but you won't be able to review a list of all previously featured beers.
All previously featured beers from the Rare Beer Club are publicly archived on www.beermonthclub.com.
Clubs of America only lists some of its previous beer selections on the public website.
Satisfaction Guarrantee
No
Yes
Yes
Domestic or International Beers
Domestic
Domestic
International
Domestic
Variety
Shipments include your choice of beers from Californian microbreweries. If you don't make selections, the club will choose for you.
Shipments include 2 styles of beer from 2 different microbreweries (US or international)
Shipments include 4 styles of beer (3 bottles of each) from 2 different domestic microbreweries.
Selection Process
CBC specializes in Californian breweries and the club owners carefully select the featured microbrews. CBC currently has relationships with over 40 breweries and offers almost 200 different beers.
For each of its beer clubs, MonthlyClubs.com has a panel of beer experts conduct a blind taste test of over 500 beers a year. Less than 20% of beers they taste will be considered for use in the clubs.
A panel of beer experts conducts taste tests to select featured beers each month.
Reordering Your Favorite Beers
Yes
Yes
Yes (at a discount)
Membership Minimum
No minimum
2-shipment minimum
No minimum
Discount For Buying in Bulk
No
Yes
Yes
Bonus Gifts
No
No
No
Customization
N/A
Yes, the "Design Your Own Club™" program allows members to combine any of the company's six monthly clubs that they want to try.
Yes, the "Mix Your Clubs" feature allows members to choose which of the 8 different clubs they want to try during each month of their membership.
Gift Notification Options
Email (instantly)
In Shipment
Email (instantly or on a scheduled day)
Printable Card
Email (instantly or on a scheduled day) Printable Card Traditional Mail
Shipping Options
Monthly
Monthly
Bimonthly
Quarterly
Monthly
Bimonthly
Quarterly
Shipping Schedule
Shipments are sent out the last week of every month.
Shipments are sent between the 15th and 25th of each month and arrive within 7-10 days.
Shipments should arrive during the 3rd or 4th week of the month.
Shipping Restrictions
AK, HI, KY, MN, and UT
AK, HI, and UT
AK, HI, and UT
Approximate Cost Per Bottle
$10
$14.83*
$3.07* 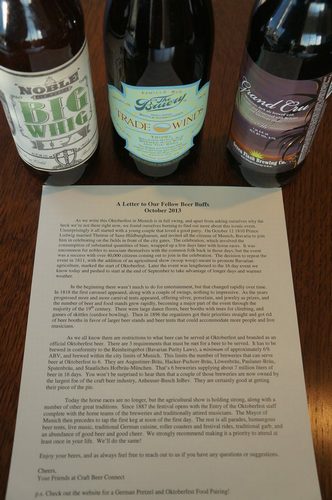 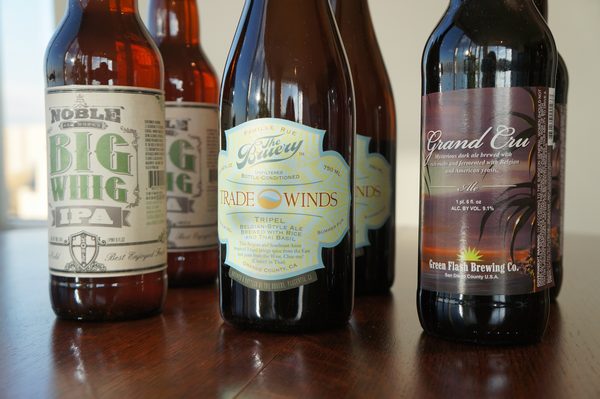 Each shipment includes two bottles of each type of beer.
Credit: Mary Griffin
Membership Options
CBC's Specialties (or Tier 3) membership is the most premium of the four memberships that they offer. It features CBC's entire inventory including exclusive, seasonal and other limited production beers. As with the other CBC memberships, you will be charged on a monthly basis, but you can cancel, upgrade or downgrade your membership at any time. Unlike most beer clubs, CBC allows all of its members the option of selecting their own beers each month or receiving CBC's selections. You can make your selections from the members' area of Craftbeerconnect.com, but you must "lock" in your picks by the 22nd of the month to guarantee delivery.
Cost per Beer
Excluding shipping and handling, the Specialties club offers beers that cost an average of $10 each.
Newsletter
A short newsletter is included in most beer shipments. It typically provides an update on the club, new microbreweries they are working with, featured beers they particularly like, etc. On the CBC website, you can review all of their previous newsletters, and you can also learn more about the beers you want to try or the beers you have received (brewery background, tasting notes, food pairings/recipes, etc.). 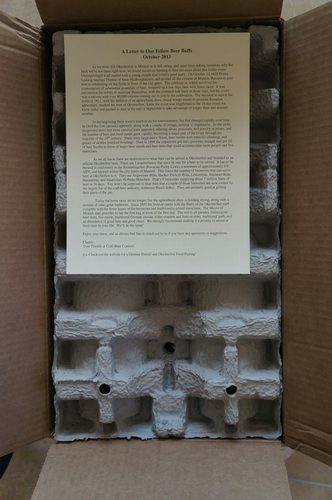 A newsletter like this is included in most shipments.
Credit: Mary Griffin
Bonus Gifts
None.
Recently Featured Beers
Some recently featured "Tier 3" beers include: Lost & Found from The Lost Abbey, Renegade Blonde from the Iron Fist Brewing Company and Speedway Stout from AleSmith.
Gift Information
When sending a gift membership, you can either have CBC put together a shipment of beer based on your suggestions (ex. "Mary loves IPAs") or you can just send the gift recipient an email with the details of the club, the number of months you have purchased (1, 2, 3, 6 or 12) and instructions on how to make their own beer selections. If you have CBC put together the shipment, they will send it out during the next shipping cycle with your gift message included. If you choose to email the recipient, they will be notified immediately.
Shipping Schedule
Beer shipments are sent out on a monthly basis. Your credit card will be charged on the 23d of each month, and your shipment will be sent out shortly thereafter. Delivery times will vary depending on how far from San Diego you are. 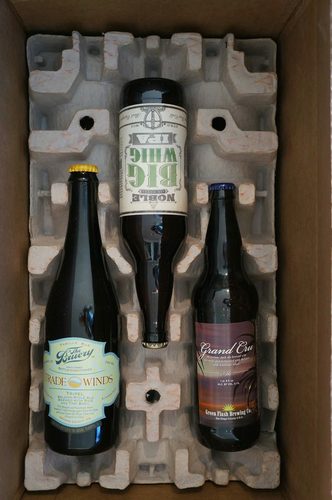 Beers come securely packaged in boxes like this.
Credit: Mary Griffin
Satisfaction Guarantee
CBC doesn't offer a 100% satisfaction guarantee. If you have received the wrong beers in your shipment, CBC will cover the costs of exchanging the bottles for the right ones. However, if your bottles are damaged by "Acts of God or weather", they will not replace them. You can cancel your membership at any time without incurring cancellation fees, but you must cancel before the 18th of that month or else your request won’t go into effect until the following month and you will still receive/pay for that month's shipment.

There aren't any consolidated customer reviews of Craft Beer Connect's beer clubs on independent (unbiased) websites, but it seems like the individual reviews I saw were mostly positive. I have personally been paying for a Specialties Club membership since June 2013 and have been very happy with my experience. I love that you are able to choose which beers you want to receive and that their website includes each beer's ratings from other members, RateBeer and Beer Advocate. Since I'm not from California, I find it especially helpful when trying to discover more obscure breweries.

Whether I have chosen my own beers or let the club choose for me, I have been consistently impressed with the quality and variety of the beers I've received. While I do wish the club offered a satisfaction guarantee, I have never gotten a beer that was bad or had an issue with the shipments. All shipments have consistently arrived on time and in perfect condition. The only other complaint I have and think the club could easily change is including background and tasting notes on the beers in each shipment. This information is on the website, but it is kind of a pain to look it up when you are trying to enjoy your beer. Overall, the CBC's Specialties Club is an awesome beer club, and we would highly recommend it to our members as a gift for themselves or for another beer lover in their life.